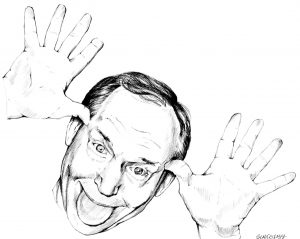 Like many Americans I have a mixed heritage. My mother’s side is mostly German. In fact her great-grandfather was the guy who immigrated to this country and my Mom was the first generation raised speaking English. About the only German I know is “gesundheit!” My ancestor’s name was Etzel and our family claims we must therefore be descended from the famous King Etzel of the Huns. Never heard of him? Check out Wagner’s Nibelungenleid. King Etzel’s more famous name is Attila. Yes, THE Attila.

So, one day in high school, I was telling my classmates in Texas History class that I was of royal lineage and they should all bow down and start calling me Sir Colby. Then, in jest, when I turned in a history exam I signed it Sir Colby. The teacher thought that was hilarious and made a big deal about it in class and even spread the word to other teachers who also teasingly called me Sir Colby. I was drawing cartoons for the student newspaper and started using the moniker as my signature. I’ve been Sir Colby ever since.