Art stuff: I’ve been drawing for as long as I remember. As a child I would draw my older sister’s paper dolls and outfits. In junior and senior high school I drew cartoons for the community paper and school papers and was awarded a scholarship to the art school at the Dallas Museum of Fine Arts. I studied art at the University of Texas and earned a Bachelor of Arts degree from Texas Lutheran University with majors in art and history. I’ve illustrated various booklets published by the United States Soccer Federation and have been published in The Dallas Morning News, The White Rocker, The Seguin Gazette, The Daily Texan, The Lone Star Lutheran and The Pitch.

I’ve received various awards from the National Arts Program and the State Fair of Texas. I’ve been a staff artist or have done freelance work for advertising agencies but usually find “commercial art” too constrictive.

Sidetracked: Like many aspiring artists my goals were diverted in order to pay the bills, especially after God blessed my wife and me with a child early in our marriage. I got a “temporary” job with the Dallas Park and Recreation Department and retired after 30 years.

Other stuff: I got involved in soccer back in the mid-1960’s and found myself playing on a state championship team, coaching at the high school level and helping organize new leagues and competitions in various parts of the city including an inner-city program with more than 3,000 children from economically disadvantaged neighborhoods. I became a referee and advanced to the professional level, officiating games in the outdoor NASL, the indoor MISL and various other leagues. Currently, I’m a National Emeritus referee and still find time to do local amateur games.

I sing in our church choir but not loud enough to ruin the music. My wife and I were married for 40 years before she passed away suddenly in May, 2008. We have two children and four grandchildren. 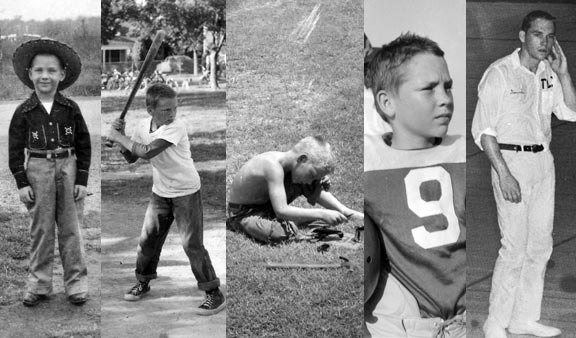 Everyone, especially an artist, brings to their work all that they are; their experiences, their environment, their relationships. But today we are only what we are now. Tomorrow will continue to add to those influences.

Thirty years working with the Dallas Park and Recreation Department exposed me to people of all ages and interests, from pre-schoolers to seniors, from the active to the sedentary. Playing and coaching soccer and refereeing as a national-level, professional soccer referee introduced me to a world-wide assortment of nationalities, ethnicities and cultural differences.

After retirement I was finally able to re-commit myself to my love of creating art, utilizing the exposure I had received from the people I had met. A cartoonist by nature, my business card declares the motto, “Not Too Serious Art,” along with the artist epithet, Sir Colby, a signature I’ve playfully used since high school when my history teacher discovered I might be descended from King Etzel of the Huns (aka Attila).

And yet I do have a serious side, exemplified by vivid drawings that capture the subject matter’s character. I feel having worked so closely with such a variety of people has allowed me to fully appreciate the subtle intricacies of personality, especially when people are going through the ordinary task of living life. My acrylic paintings are more impressionistic in style with a controlled use of color. My murals often allow me to merge my whimsical cartoonist urge with the more profound painting approach.

Drawing: Whenever someone retired from the Dallas Park and Recreation Department I was asked to do a drawing of them. When I retired I did this self portrait to playfully  tell everyone goodbye.

Like many Americans I have a mixed heritage. My mother’s side is mostly German. In fact her great-grandfather was the guy who immigrated to this country but my Mom was the first generation raised speaking English. My ancestor’s name was Etzel and our family claims we must therefore be descended from the famous King Etzel of the Huns. Never heard of him? Check out Wagner’s Nibelungenleid. King Etzel’s more famous name is Attila. Yes, THE Attila.

So, one day in high school, I was telling my classmates in Texas History class that I was of royal lineage and they should all bow down and start calling me Sir Colby. Then, in jest, when I turned in a history exam I signed it Sir Colby. The teacher thought that was hilarious and made a big deal about it in class and even spread the word to other teachers who also teasingly called me Sir Colby. I was drawing cartoons for the student newspaper and started using the moniker as my signature. I’ve been Sir Colby ever since.