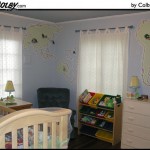 A frog in India tames an elephant. In China a frog pulls a rickshaw. Frogzilla rampages off the coast of Japan while a sailor frog tours the islands. An Australian frog finds comfort in a kangaroo. Over in South America a frog studies the critters of the rainforest and a gaucho tugs at a llama. The old steam train was added later and includes a monkey passenger, a nod to the Monkey Mural. 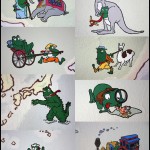