One of my heroes, Dietrich Bonhoeffer was a Lutheran theologian who could not ignore the abuses by the Nazis. He left Germany and spent time in England and in the United States but returned to his homeland to participate in the resistance. He was eventually arrested in 1943 and executed just before the end of the war.

The three colors represent those of the German flag. 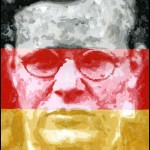