This painting is based on John 20:11-16, especially verse 16. It is dedicated to a high school classmate and good friend, Mike Minick, who died in 2014. He had given the canvas to me and after his death I decided to do a painting with a religious theme. I was inspired by that instant in time after Jesus says Mary Magdalene’s name but before she realizes it is Him. I feel that she represents us all because we have heard Jesus’ name but we don’t yet fully realize what that means.

I was also inspired by a sculpture by artist Bruce Wolfe of the same encounter between Mary and Jesus. I used his Mary as my ‘model.’ I originally had Jesus in the painting but I removed Him because I wanted the focus to be on Mary. 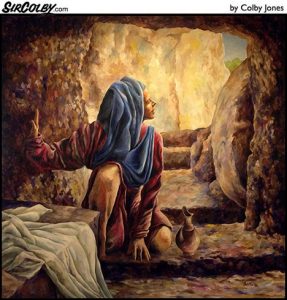 It was unveiled December 11, 2016 during a concert at the Dallas Museum of Biblical Arts and dedicated on Easter Sunday, April 16, 2017, Pastor Rich Pounds officiating, at Central Lutheran Church in Dallas, where it now hangs in the narthex.