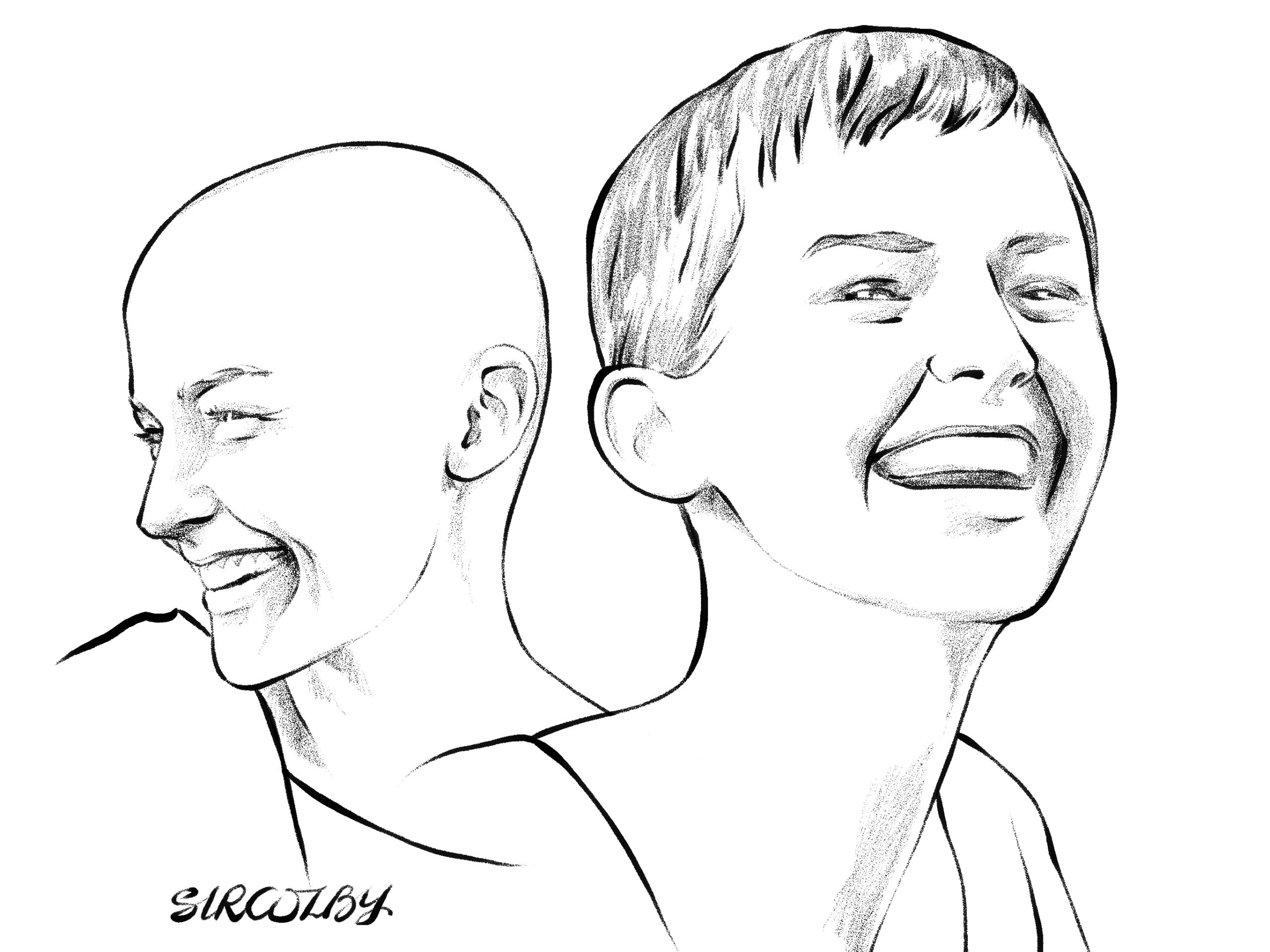 Digital illustration. Please take the time to read her words below.

God is on the Bathroom Floor

I don’t remember most of Autumn, because I lost my mind late in the summer and for a long time after that, I wasn’t in my body. I was a lightbulb buzzing somewhere far.

After the doctor told me I was dying, and after the man I married said he didn’t love me anymore, I chased a miracle in California and sixteen weeks later, I got it. The cancer was gone. But when my brain caught up with it all, something broke. I later found out that all the tragedy at once had caused a physical head trauma, and my brain was sending false signals of excruciating pain and panic.

I spent three months propped against the wall. On nights that I could not sleep, I laid in the tub like an insect, staring at my reflection in the shower knob. I vomited until I was hollow. I rolled up under my robe on the tile. The bathroom floor became my place to hide, where I could scream and be ugly; where I could sob and spit and eventually doze off, happy to be asleep, even with my head on the toilet.

I have had cancer three times now, and I have barely passed thirty. There are times when I wonder what I must have done to deserve such a story. I fear sometimes that when I die and meet with God, that He will say I disappointed Him, or offended Him, or failed Him. Maybe He’ll say I just never learned the lesson, or that I wasn’t grateful enough. But one thing I know for sure is this: He can never say that He did not know me.

I am God’s downstairs neighbor, banging on the ceiling with a broomstick. I show up at His door every day. Sometimes with songs, sometimes with curses. Sometimes apologies, gifts, questions, demands. Sometimes I use my key under the mat to let myself in. Other times, I sulk outside until He opens the door to me Himself.

I have called Him a cheat and a liar, and I meant it. I have told Him I wanted to die, and I meant it. Tears have become the only prayer I know. Prayers roll over my nostrils and drip down my forearms. They fall to the ground as I reach for Him. These are the prayers I repeat night and day; sunrise, sunset.

Call me bitter if you want to—that’s fair. Count me among the angry, the cynical, the offended, the hardened. But count me also among the friends of God. For I have seen Him in rare form. I have felt His exhale, laid in His shadow, squinted to read the message He wrote for me in the grout: “I’m sad too.”

I remind myself that I’m praying to the God who let the Israelites stay lost for decades. They begged to arrive in the Promised Land, but instead He let them wander, answering prayers they didn’t pray. For forty years, their shoes didn’t wear out. Fire lit their path each night. Every morning, He sent them mercy-bread from heaven.

I look hard for the answers to the prayers that I didn’t pray. I look for the mercy-bread that He promised to bake fresh for me each morning. The Israelites called it manna, which means “what is it?”

I see mercy in the dusty sunlight that outlines the trees, in my mother’s crooked hands, in the blanket my friend left for me, in the harmony of the wind chimes. It’s not the mercy that I asked for, but it is mercy nonetheless. And I learn a new prayer: thank you. It’s a prayer I don’t mean yet, but will repeat until I do.

Call me cursed, call me lost, call me scorned. But that’s not all. Call me chosen, blessed, sought-after. Call me the one who God whispers his secrets to. I am the one whose belly is filled with loaves of mercy that were hidden for me.

Even on days when I’m not so sick, sometimes I go lay on the mat in the afternoon light to listen for Him. I know it sounds crazy, and I can’t really explain it, but God is in there—even now. I have heard it said that some people can’t see God because they won’t look low enough, and it’s true.

If you can’t see him, look lower. God is on the bathroom floor.