Just for fun let’s discuss what I go through to draw a cartoon.

1. An idea pops into my head. This can come at any time. Unfortunately, it may come to me when I’m driving down the highway, or about to go to sleep, etc. I have forgotten many hilarious cartoons before they ever got to paper and pencil.

2. Write it down! Unfortunately, again, later I have no idea what my note was supposed to mean. 2(a). Be specific and obvious and include both text and image. Unfortunately, yet again, sometimes when I look at it later it makes sense I think, “Well, that’s not funny at all.” So nevermind.

3. Finally, I’ll do a pencil sketch trying to compose the idea on paper. Sometimes it’s close to a finished drawing and other times it’s still very sketchy.

4. Scan the sketch and save it to my computer.

5. Using a stylus and tablet to draw I will create layers in Photoshop. The bottom layer is the scanned pencil drawing. The first new layer will be for the lines; or what used to be the “pen and ink” stage. Often the lines will be on separate layers so I can move characters around for better composition then I’ll merge all the lines onto a single layer. Text, word balloons etc. must be thought out while composing the drawing but I’ll keep them on their own layer because it’s easier to move them and color under them.

6. Then I delete everything on the layer that showed the original scanned pencil. That layer, under the lines layer, will be for color. I can use the magic tool to select areas on the line layer and fill them with color on the color layer.

7. With the color done I’ll add shading. Most of the time that will be done on the color layer but occasionally I’ll had another layer just for the shading.

8. I’ll flatten the image into one single layer and save it. I’ll make a copy and reduce the file size to fit into my SirColby template.

Below are images from my recent cartoon, “Just Right.”

A. When the idea came to me I did a very quick sketch on my iPad and emailed it to myself. 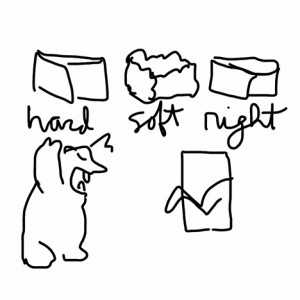 B. Later at my desk I did some pencil sketches of what I wanted in the cartoon. 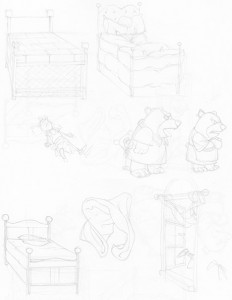 C. Line layer on the computer. 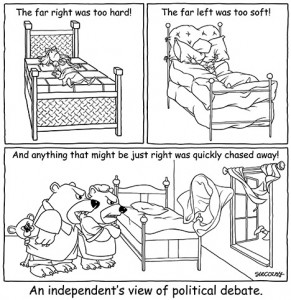 D. The color layer. I hid the line layer so you can see just the color. 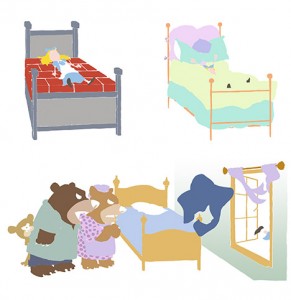 E. Simple shading done on a separate layer between the lines and the color. 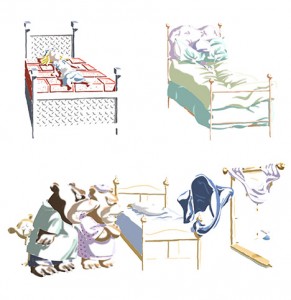