By request I had previously offered up some closer views of the various monkeys in the Monkey Mural. So, now I’ll do the same for the Traveling Frogs Mural. The frogs are a lot smaller in scale than the monkeys are. The mural covers all four walls.

The largest painting is that of North America. 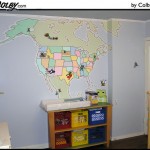 There are too many frogs so I split them into two groups; those in the 48 contiguous states and those who aren’t (sorry, Hawaii and Alaska). The US frogs include a biker in the northwest, a Southwest pilot in Arizona, a hobo hitch-hiking across the south, frogs immortalized within Mount Rushmore and the Statue of Liberty and a bull-riding cowboy in Texas. 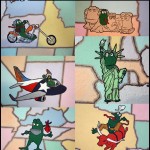 The other frogs on this wall include an Eskimo emerging from an igloo, a dog-sledding Mountie, one enjoying the Pacific coast of Mexico and a hula-clad windsurfer. A Viking explores from the adjacent wall, a pirate trolls the Caribbean and, just of the heckuvit, an Alien frog hides behind the door. 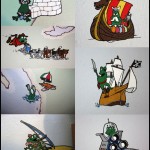