I don’t remember how the conversation started but it ended up being about Dallas Cowboys Cheerleader, Tina Hernandez, from the late 1970s, early 1980s. I mentioned that I had done a drawing of her but a search on my website revealed I had never posted it except in one of the banners. A photographer friend of mine had taken a photo of her on the field and gave it to me to draw. Tina moved on to Hollywood, became Tina Gayle, and starred in the TV series, “CHiPs.” Many years later here’s the drawing: 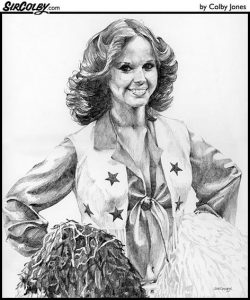