I gave my grandkids (ages 8 and 11) an art lesson on the ways I usually draw cartoons. I had them do a pencil sketch. Then we scanned it into the computer, opened it in Photoshop, created a new layer and then they did the line work using my stylus and Wacom tablet. When that was done to their liking we printed a copy so they could see what it looked like on paper. Then we deleted everything on the pencil layer and they added color. Last step was to flatten the image and print it. At the end of the lesson they had a copy of each stage: pencil, line and color. I think they did a pretty good job on their respective drawings, “Dino Duck” and “Awesome!” 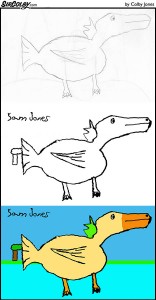 The first big hurdle was learning to use the stylus and tablet; drawing in one place while looking at another. Plus, a stylus and mouse do not work the same way. When you lift a mouse the cursor stays where it was. The stylus cursor appears wherever you touch the tablet. That took some getting used to.

The next challenge was duplicating the pencil drawing. I tried to explain that the pencil sketch was only a guideline and they did not have to do it exactly the same way. One was more free with the line work, the other meticulously copied the original. One had to make corrections immediately, the other patiently waited and made corrections at the end.

When one was struggling with coordination and concepts I explained, “It’s like when you hand me the controls to your X-Box and expect me to immediately be able to play.” It was a fun project!